These pictures were taken on Tuesday, when I was supposed to post this photoblog thing. I was in elbi on tuesday morning, and went to Ponticello bar to watch Ria's gig that night.

Road out of BIOTECH

That morning, I went to BIOTECH to do some more experiments and was planning to get out of there via the BIOTECH bus which goes by around 9:30am.. but unfortunately, I was a couple of minutes too late, so I ended up walking out of BIOTECH. But luckily, after I took this picture, a car came by and let me hitch a ride to the campus! :D

Math. I was really really thankful at around my third year when I finished Math 38, which meant I need not go to this building anymore. It's not like I don't like math.. in fact, I like it! .. But it doesn't seem to love me back.. XD

The source of my endless laziness to walk to class. Specially when the 'Kaliwa' and 'Kanan' routes were established. Jeep straight to CEAT! Yeah! XD But since I already graduated and everything.. I can't bring myself to just pay the student rate. :P

The elbi sky~
So beautiful, ain't it? It's definitely hard to see a nice blue sky in the city... since it's blanketed by smog here.. hahaha! 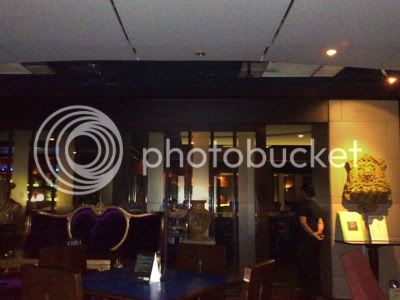 A shot of Ponticello bar

My first bar experience...? It certainly feels like I'm an adult when I was in there.. It was a bit of a shock at first actually.. I'm not sure why.. but I just had to think "..ahh.. to be going to places like these.. I really am an adult now, huh.." Maybe I've just been convincing myself that I was too young for these kinds of things, or rather, I never really wanted to grow up or something. Ahahaha! Anyway, it was still quite the experience.

It's been sooo long since I listened to a band live.. I think the last was when I was still with my first ex. XD It truly is very very very different from just watching a performance on TV or on video.. I loved it. Though I didn't really know more than half of the songs they played (How ignorant can I get? lol.) it's just that you can feel more the feelings of the performers when you're this close.. (I wonder how I'd feel when I see Arashi or NEWS perform live? I'll probably faint because of the overwhelming feelings.. XDXD)